SSPP's highlight event of the year once again didn't fail to enthral the crowds with another fun-packed line up from our budding artists and entertainers. 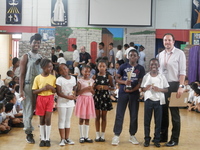 Andres and the Comedy Company opened the show with their very funny comic robot sketch, followed by the rhythmic crew, Jayden and the Golden Girls featuring our very talented drummer Moses. Next up were the sunshine and shades Bollywood girls, who couldn’t help but bring a smile to our faces; before the round ended, with soloist Khyan, who with a little bit of help from a friend and mass support from the audience, wowed us with his vocals. Round 2 kicked off with a fantastic Karate kata by Tymon and Riley, followed by a beautiful ballad by Olivia. Next up were the cool and moody Oasis brothers JP and Thomas, who were looking back in anger, before Rhys rocked us out of the round with some amazing flips and dance moves - far too quick to be captured on camera. Izuchi and Tiffany oozed us into the final round with a very sassy dance number and keeping us in the groove, came The Singing Souls, who wooed us with their soulful tunes. Up next were Team Dream Shavonni and Alyssa with their terrific drum and solo duet, before a very cool Caleb closed the show with his spectacular and funky Michael Jackson number. Deciding on the fate of these youngsters, were judges Mr Roca-Mas and Miss Sophocleous, with the help of special guest Miss Shulunghu, who couldn’t resisting returning for this spectacular annual talent bonanza. After much deliberation, they finally revealed their winning choices. In third place came Caleb, second place went to The Singing Souls and the winner of this year SSPP Talent Show 2017 was Rhys. It was an awesome and entertaining afternoon and, in true SSPP fashion, the children proved to be an amazing and supportive audience. Photographs can be viewed in our gallery section.