On Wednesday, 8th June a group of 24 children from Y5 and Y6 represented the school at the annual Quadkids Athletics event. 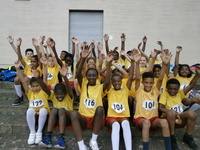 Each child competed in four different events: 75m sprint, throw, standing long jump and a 600m run. SSPP entered three teams for the event and, out of 29 teams, we had the following results: A Team: 9th B Team: 22nd C Team: 25th We had one outstanding athlete among us in our boys’ event: Rhys Ofori (6B) was the fifth placed boy overall for his combined results for the four events. He was also the second fastest competitor out of 248 children who competed in the 75m sprint. In the 75m sprint we also had Thomas Benson (5W), who claimed 14th position, while Paul Larbi (6B) gained 17th. Rhys has shown that he cannot only sprint but he also has the capabilities of a long distance runner and standing long jumper – claiming 5th position overall in both of these events. The children all had a wonderful day and exhibited outstanding behaviour throughout. Well done to everyone!