The pupils attended the borough's Holocaust Memorial Day last Friday to remember the millions murdered in the Holocaust under Nazi persecution and in more recent genocides in Cambodia, Rwanda, Bosnia and Darfur. 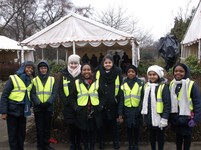 The theme for the event, held annually to mark the anniversary of the liberation of the Nazi concentration camp, Auschwitz-Birkenau, was ‘How can life go on?’ During the service in the Holocaust Memorial Garden in Valentines Park, the pupils listened intently to stories of how victims of genocide around the world had overcome adversity and had gone on to make positive contributions to society. Despite freezing cold conditions, the pupils comprising School Councillors from Y4-Y6, along with our Head Boy and Head Girl, behaved impeccably throughout the service and proved to be outstanding representatives for SSPP.