Last Wednesday 24 pupils from SSPPs did us proud in the annual Quadkids Athletics event, with Year 6 pupil Ujunwa winning overall best girl athlete in the borough. 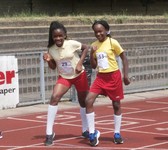 During the event at Ilford Sports Club, the Y5 and Y6 pupils each had to compete against 31 teams in four events: 75m sprint, throw, long jump and 400m long distance. The usual long distance run for this age group is 600m but, because the weather was so warm, it was decided that all children would only have to run 400m (which is still a terribly long way!).The children were split into three separate teams and competed to gain the quickest time or longest distance in each event. Our teams finished as follows: A Team - 6th, B Team - 22nd and C Team - 20th. Ujunwa was the winning girl overall in Redbridge by gaining the highest total score across the four events. She certainly lived up to being the best she could be, well done Ujunwa!